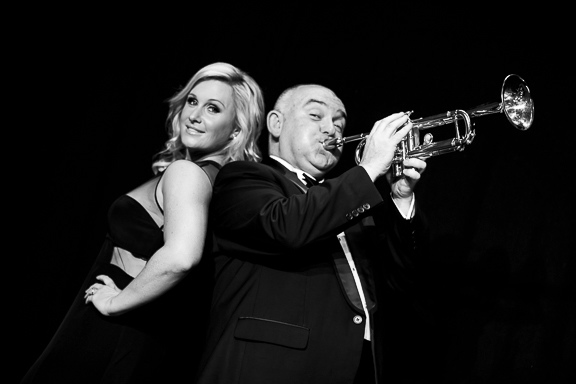 Conservatorium Director Anita Bellman is already excited: “It’s a great pleasure to welcome James and Emma to Lismore again. Don’t miss this opportunity to experience pure swinging jazz from the best in the business. Book now and prepare to be blown away in a toe-tapping, show-stopping evening of entertainment for the whole family.”

James Morrison is renowned as one of the finest jazz players Australia has ever produced. Perhaps best known as a trumpet virtuoso, his showmanship extends to playing tuba, trombone, saxophone, clarinet, double bass, guitar and piano during his stellar international career. He has played professionally since the age of alongside the best jazz musicians of our time, including Ray Brown, Dave Brubeck, Ray Charles, Dizzy Gillespie, Quincy Jones, and Wynton Marsalis. His dream team quartet now comprises his sons William and Harry and drummer Patrick Danao.

When Emma Pask last performed at the City Hall in 2007, Morrison described her as “The greatest gift to Australian jazz vocals in the last decade.” He spotted her while giving a high school concert when she was just 16. She sang with his band that night and their musical collaboration has entertained audiences around the world for more than 20 years. Emma has performed for adoring audiences including Diana, the late Princess of Wales; Princess Mary of Denmark; and at the wedding of Nicole Kidman and Keith Urban.

Also on the bill are our very own Conservatorium Youth Jazz Orchestras who will attend a workshop with the visitors in the afternoon and perform a couple of numbers with them on the concert stage. The day’s events have been organised by Conservatorium Creative Artist in Residence and YJO Musical Director Sean O’Boyle, whose association with James Morrison dates back to their tour of the UK in the late 1990s.